The route to a strong brand in six steps, it’s possible. The other steps are explained in previous blogs:

What I often see with large, but certainly also with smaller companies, is that campaigns are like loose sand. It would be much better, within the framework of building a strong brand, if campaigns were brand supporting and form part of the branding. It becomes even more complicated if there is no build-up for the campaign flow, and activities are carried out separately, for a quick fix. As far as I am concerned, this is a mortal sin if the goal is to become a lovemark. I will tell you more about this in my sixth blog article, along with how to build a results-oriented campaign and achieve short-term success while working on creating a strong brand.

What is the difference between branding and campaigns? Brand Management, branding, what do these terms really mean? To explain this from a larger perspective, I started googling. And then I came across this piece of information with a bit of interesting history behind it:

‘The name branding originates from the branding of cattle to show who owns the animal in question. At the beginning of the 19th century, the industrial revolution started, and mass production began. This meant that it was necessary to place the products produced under a single brand name, a’ brand’. As consumption increased and more and more different brands developed, a brand name alone was no longer sufficient to distinguish yourself from another brand.’

Branding nowadays goes much further than just a name or logo. The customer must feel connected, the brand must create a certain feeling. What is the story behind the brand? At Anceaux Marketing, we call this a Brand Promise. And compliance with the promises that are made is part of the branding. In the first step, ‘Make a brand promise’ we paid attention to this topic.

We will now discuss the campaign part. What are campaigns? A marketing campaign is a series of actions, performed over a period of time, at a fixed schedule or at alternating moments in time, through different channels, to generate as much attention as possible for an organisation, product or service in a short period of time. They can also be used to pay extra attention to a (difficult) target group, and can be communicated through various media. Paid and unpaid. The campaign is segmented, based on target groups. Where branding aims to achieve the largest possible mass, campaigns try to tell a specific, more precise story to a selected group. This can be done online, offline or through transmedia storytelling. This can also be more sales-oriented, think – for example – of a webshop.

For campaigns, we use the following model, like a funnel that you apply in order to reach your ideal customer. At all times, you want this to be part of or keep in line with the umbrella framework, the brand promise. A good example where this has not been done is Redbull, for example. 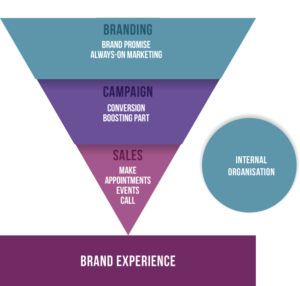 In the eighties, Dietrich Mateschitz and Thai entrepreneur Chaloe Yoovidhya introduced a whole new product. They found their inspiration in the Far East. It was an existing drink, sold in Thailand under the name ‘Krating Daeng’, which literally means ‘Red Bull’ in Thai. Mateschitz experienced a serious jetlag after a long flight; he concluded that Krating Daeng helped, and decided to introduce the project in Europe under the literally translated name ‘Red Bull’. They selected two tough bulls as logo. However, everyone knows the slogan ‘Red Bull gives you wings”, probably conceived by an advertising agency. They use cartoon-like images, and to be honest, the story is not even true.

The slogan “Red Bull gives you wings” creates an alleged stimulating effect. However, a survey among students showed that Red Bull had no influence whatsoever on concentration capacity or cognitive performance. According to various studies, Red Bull also has little or no influence on sports performance. One study did find an effect: Red Bull can keep drivers awake during long car trips. This effect is probably entirely due to the presence and effect of caffeine.

So, although this has been and still is an extremely successful campaign, and has given Red Bull it’s worldwide name and reputation, I personally find it regrettable that the campaign has gotten disconnected from the real story. For me, it feels like a promotional trick; it doesn’t feel authentic.

I truly believe that you can build even more beautiful and subsequently more successful campaigns from real stories. My advice would be: create a connection between your campaign and your story, so you can build your brand identity at all times.